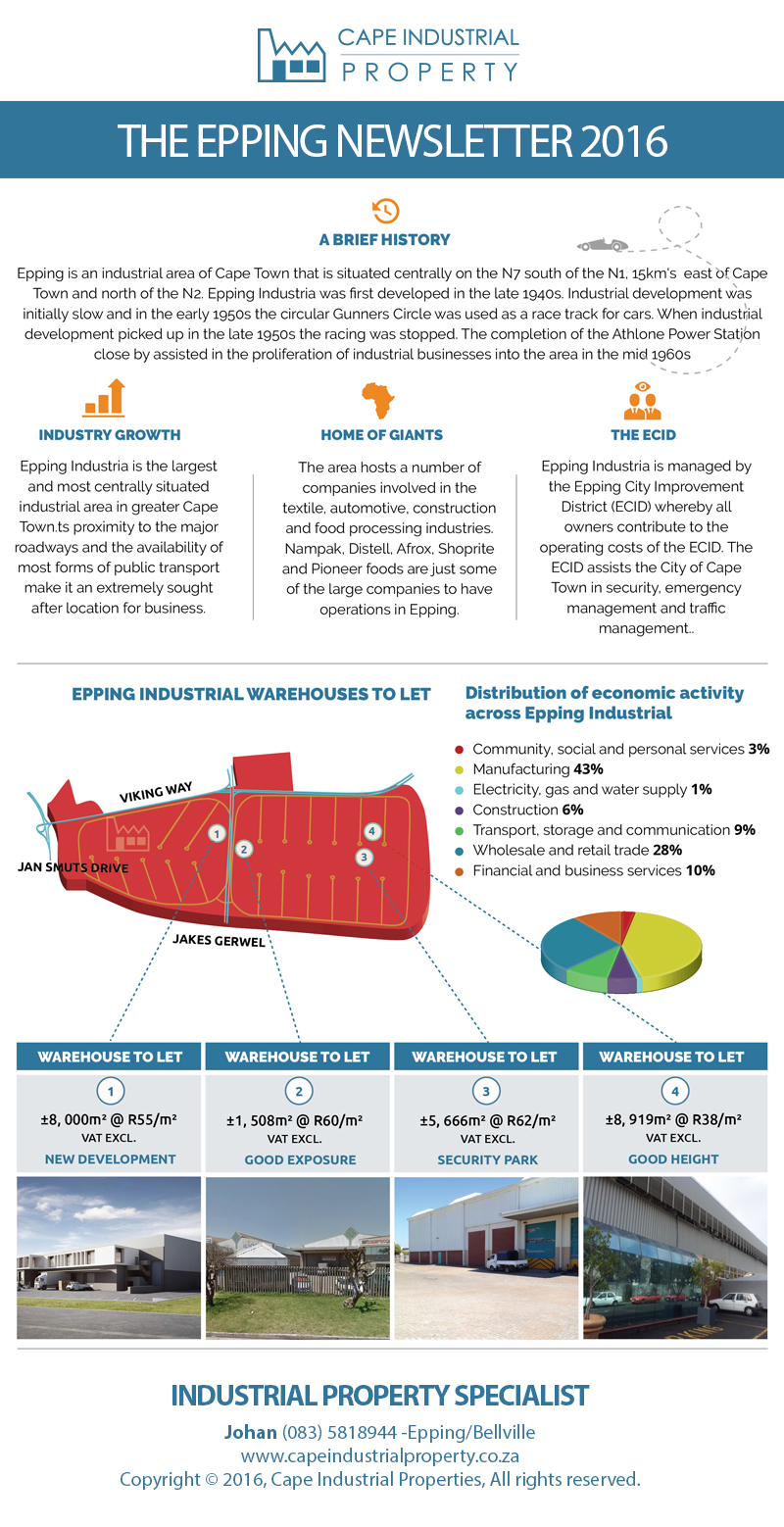 This months emailer pays homage to the Epping of old and takes a look at the great warehousing that is currently available.

Give us a call if you want to book a property consultation!

A bit of History – Epping is an industrial area of Cape Town that is situated centrally on the N7 south of the N1, 15km’s east of Cape Town and north of the N2. Epping Industria was ﬁrst developed in the late 1940s. Industrial development was initially slow and in the early 1950s the circular Gunners Circle was used as a race track for cars. When industrial development picked up in the late 1950s the racing was stopped. The completion of the Athlone Power Station close by assisted in the proliferation of industrial businesses into the area in the mid 1960s

Epping Industria is the largest and most centrally situated industrial area in greater Cape Town.ts proximity to the major roadways and the availability of most forms of public transport make it an extremely sought after location for business. 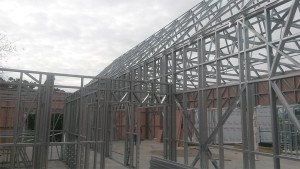 Using light steel frames to construct buildings is not only faster than conventional building methods, but also contains less embodied carbon – which is the amount of energy used in the entire manufacturing chain of a particular product, says light steel frame association the Southern African Light Steel Frame Building Association (Sasfa). Building methods using light-steel-frame building (LSFB) have until recently not been widely accepted by the architectural industry, as it was deemed unsuitable for complex and creative design. Print Send to Friend 1 0 However, Sasfa claims that, in the recent past in South Africa, not only has this “exciting building method” become increasingly accepted in the mainstream architectural and construction industries, it has also been shown that an architect can design almost any building or structure and have it executed with LSFB. The most recent example is the expansion at the well-known Vrede en Lust farm, in Boland, in the Western Cape, which used light steel frames as part of the venue’s function and wedding accommodation structures. This was built in a typical Cape Dutch style so that it would blend in with the existing buildings on the farm – some dating back to the early 1700s.

The owners decided that it should be a five-star facility, an energy efficient building with enhanced acoustic insulation between rooms, top-class finishes and, most importantly, had to be built within six months as a turnkey project. LSFB contractor The Silverline Group was contracted for the structural engineering, the detail shop drawings, and the total construction project including civil works and finishes. The project began on May 4 last year and the first wedding ceremony was successfully held at the venue on November 7. Sasfa director John Barnard says that the speed of construction possible with LSFB allows the facility to be in use quicker than is possible with other building methods, thereby producing income long before it would otherwise have been possible with conventional building methods. It is not only the speed of construction that saves money in the long term, he says, adding that by using LSFB material, wastage can be reduced significantly, transport costs slashed by up to 80% and the carbon footprint significantly reduced. Barnard states that LSFB is significantly more energy efficient than more traditional construction methods, both with regard to embodied energy of the materials and components, as well as operational energy relating to heating and cooling of the building over its design life. At Vrede en Lust, aluminium-zinc coated, high-strength steel sheet was used for the light steel structure and was roll-formed on a Framecad roll-forming machine. The roof trusses were designed by Silverline Group using software solutions and roof trusses company Mitek’s UltraSpan software. All windows were specified to be single-glazed aluminium frames – owing to the high R-values of the insulated walls, double-glazing was not required. To achieve the Cape Dutch design, a special cobbling plaster, designed by architectural company Malherbe Rust Architects, was used. The building was finished internally with full skim plaster on 15 mm high-impact cement company Lafarge’s gypsum boards with 102 mm Cavitybatt insulation supplied by insulation solutions company Isover. Silverline Group CEO Charl van Zyl says that, with fully skimmed ceilings in all bedrooms, down lighters were the perfect fit for the luxury room designs. Acoustic ceilings were fitted in the kitchen, front entrance and boardroom and restaurant. All bathroom walls were clad with fibre cement board and waterproofed, fully skimmed and painted. He adds that this was one of the most enjoyable and fulfilling projects that his team has undertaken. “We enjoyed working with owners Dana Buys and Ettienne Buys and to implement the Cape Dutch design, we were lucky enough to work with top professionals in the design and construction arenas. It is most pleasing to see that the advantages of LSFB is applicable to all buildings whatever their shape and design and I believe that this building puts to rest any doubt that LSFB will soon become the building method of choice for developers and architects alike,” concludes Van Zyl.